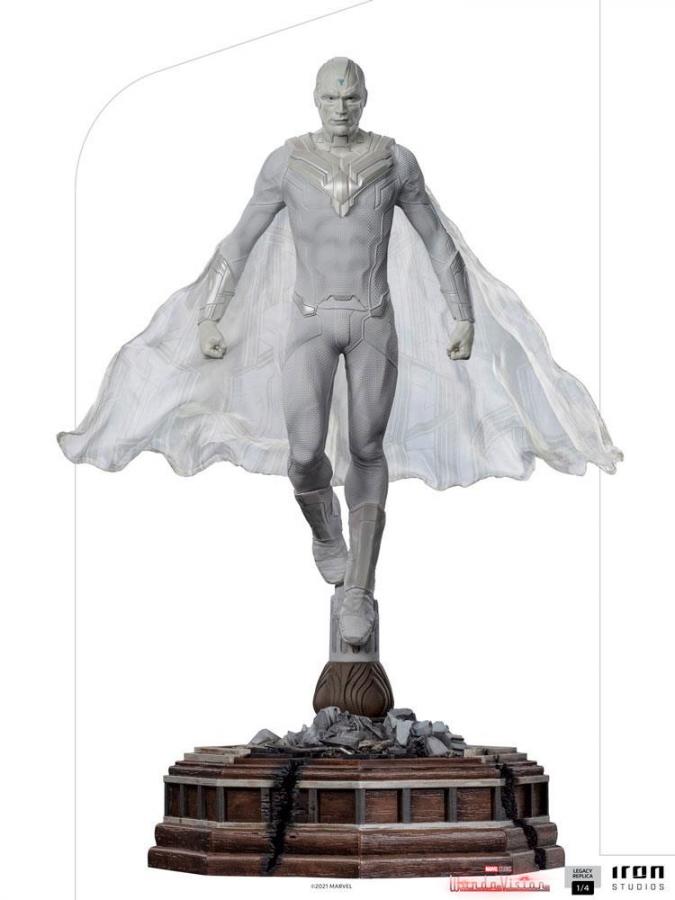 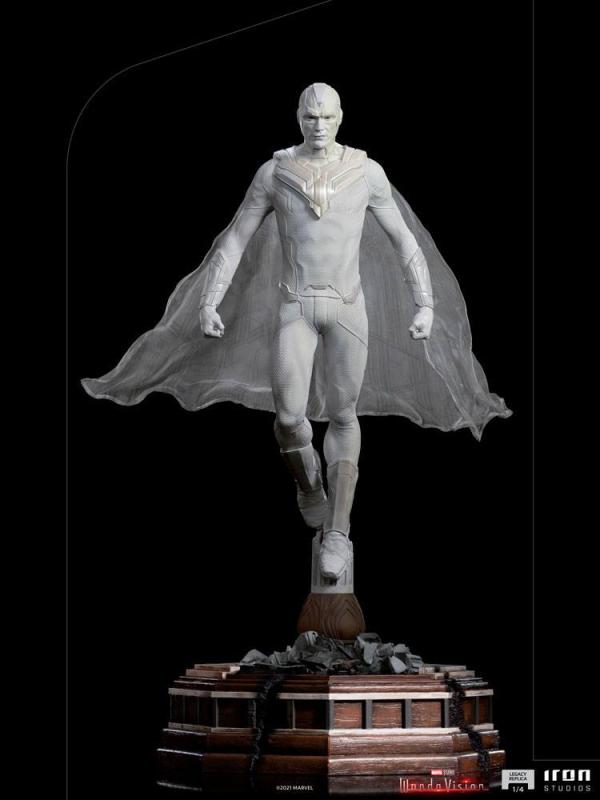 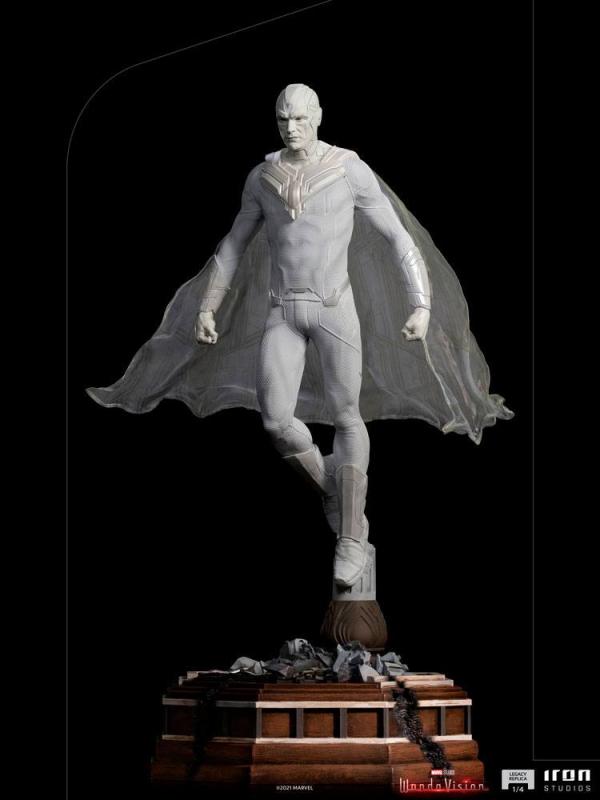 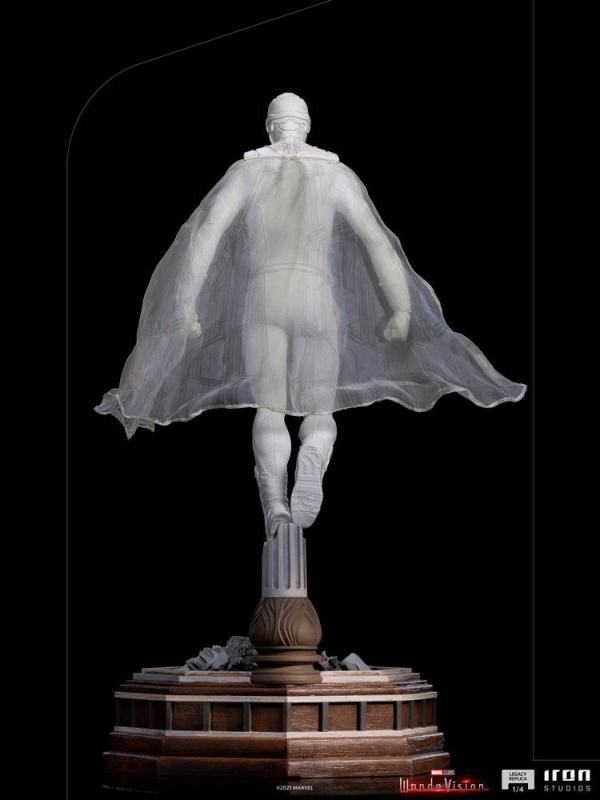 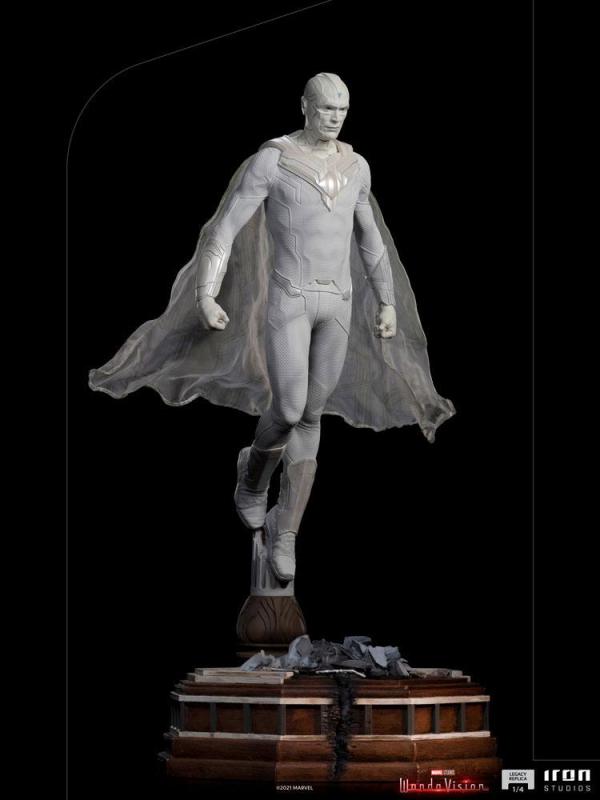 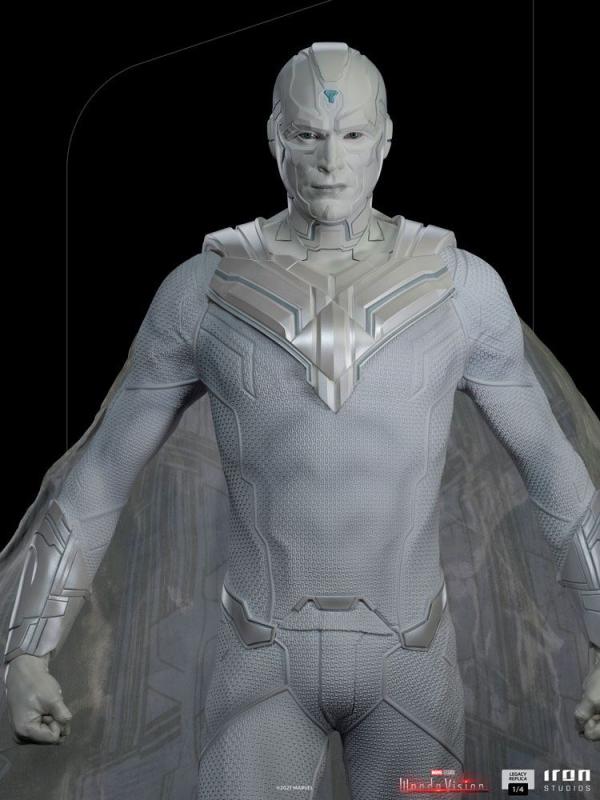 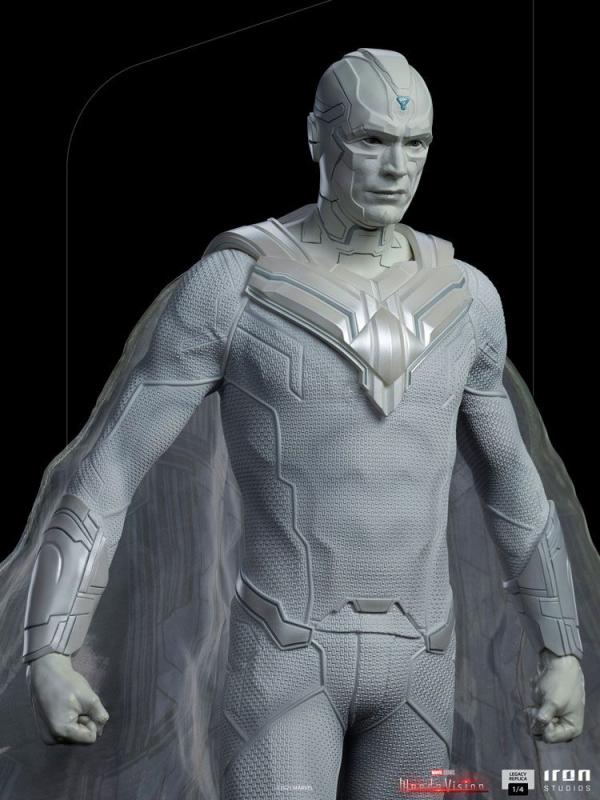 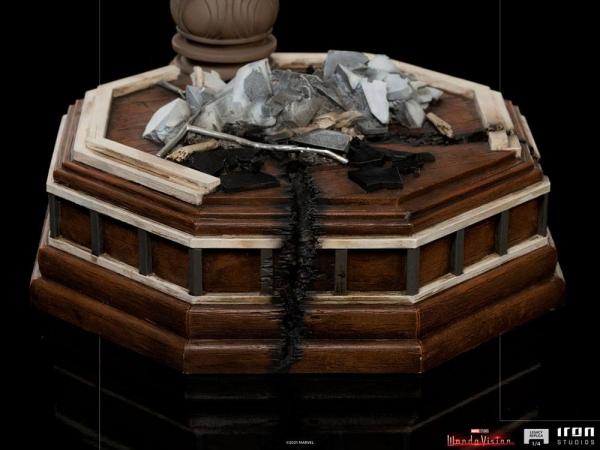 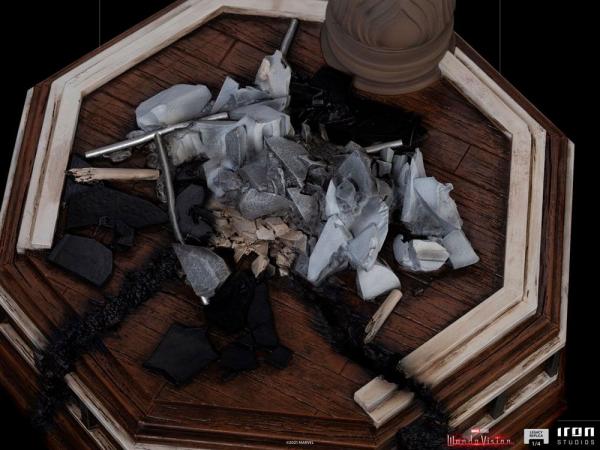 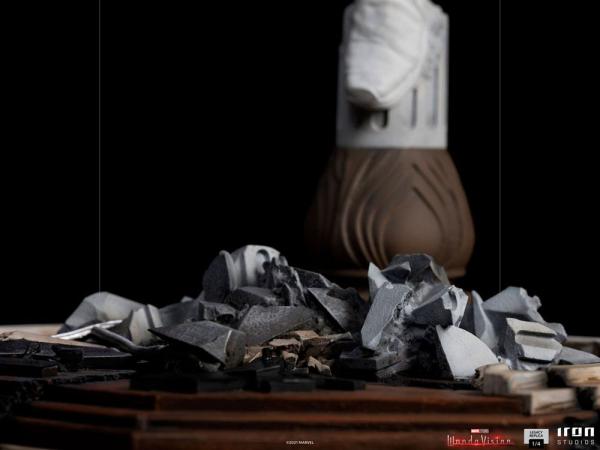 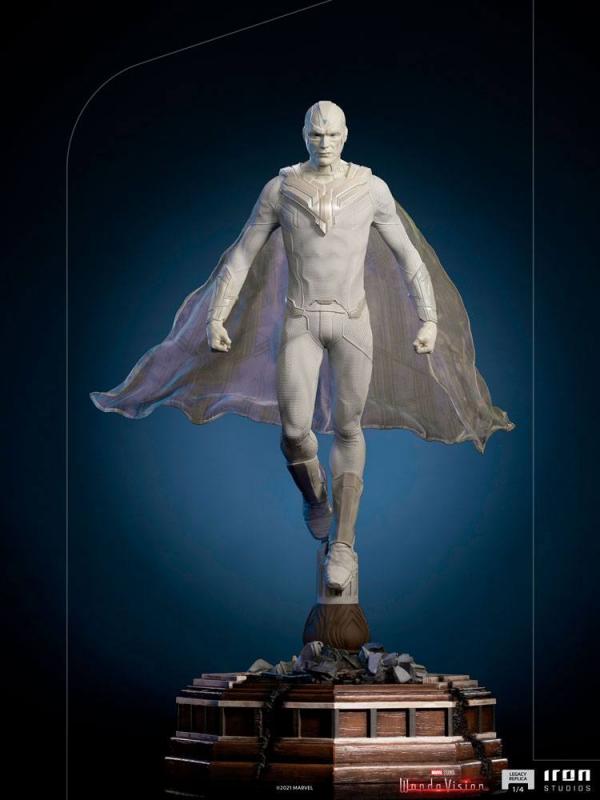 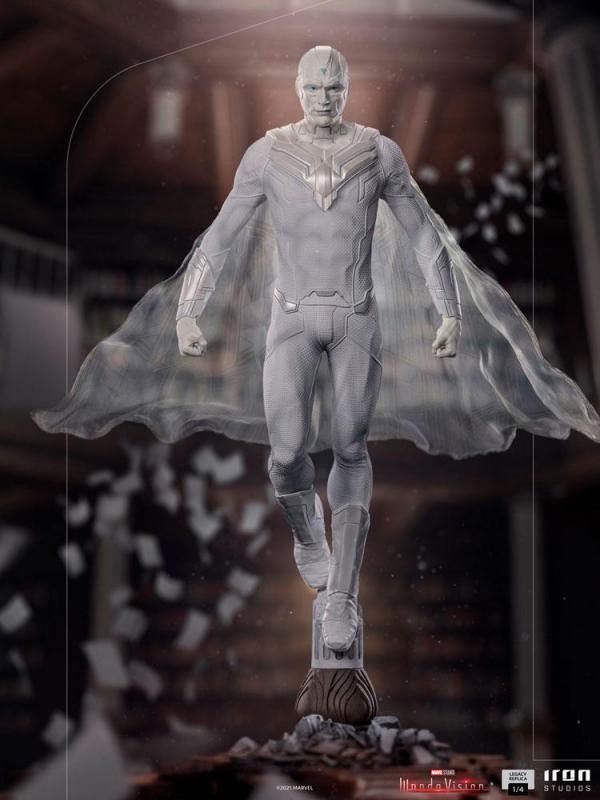 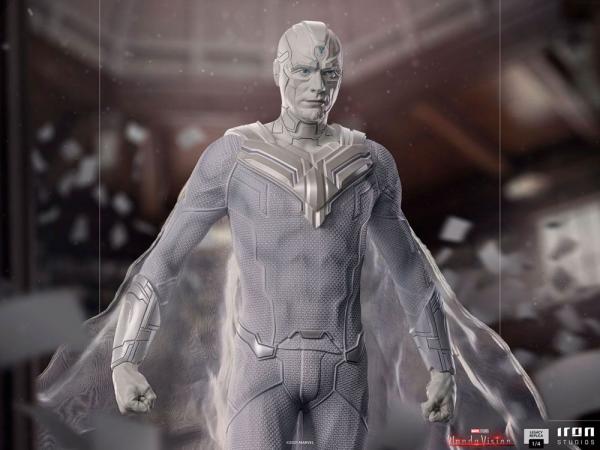 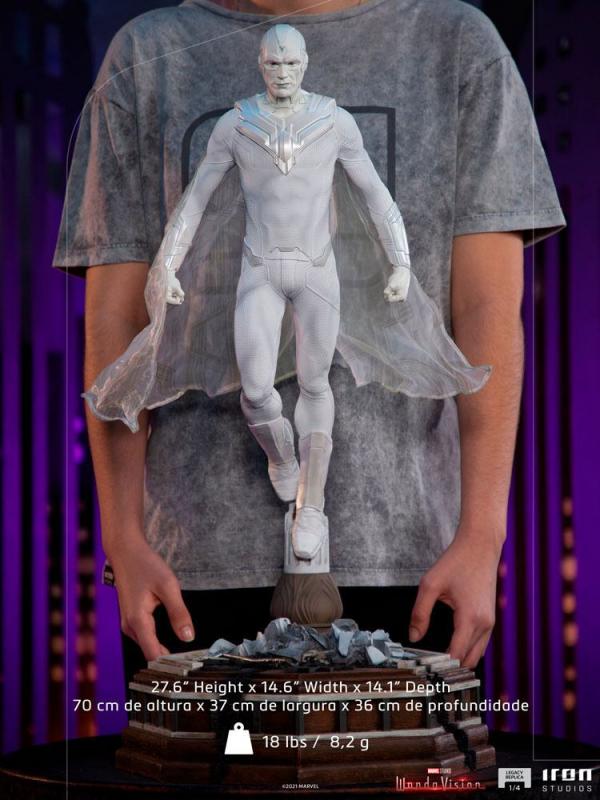 Above the destroyed remains of a library pillar located in the town of Westview is the synthezoid avenger, an artificially created humanoid being. After being revived by his beloved sorceress wife, through the Magic of Chaos, he rises, floating, with clenched fists and a grim countenance, ready to combat any threat to his family, even though he is a ghostly version of his reassembled body, without his memories and his love for Wanda Maximoff. Inspired by the latest episode of the Disney+ streaming TV series Wandavision, Iron Studios presents the "White Vision - Wandavision - Legacy Replica 1:4 Statue", where the hero faced himself in defense of his beloved wife and children.

Created by the evil robot Ultron to transfer his consciousness and serve as his new body, the synthezoid Vision was conceived as a perfect form by its creator. Upon receiving the Artificial Intelligence called JARVIS and connecting to the powerful artifact known as the Mind Gem, he gained life and intelligence, being born as a new being, who was neither Ultron nor JARVIS, but one who would fight alongside the Avengers to protect the humanity.

After Ultron was defeated, Vision became an official member of the group of heroes, under the leadership of Captain America. After fighting for some time alongside the heroes, Vision built a romantic relationship with Wanda Maximoff and they both moved to Europe but had to return to active duty to face Thanos who sought the Mind Gem to complete his Infinity Gauntlet. In the confrontation with the mad titan, Vision tried to sacrifice himself to destroy the Mind Gem, but Thanos, in possession of the Time Gem, revives the hero and kills him shortly thereafter.

Revived by his beloved's magic, in the Wandavision series, he confronted his old body that had been rebuilt in white form by the extra-governmental intelligence agency, SWORD, to be a weapon, and reactivated through a Chaos Magic sample, of Maximoff. In the confrontation, the Vision that had been revived by Wanda restores White Vision's memories, which leads him to flee for reflection, leaving the possibility of his return to the MCU.

Faithfully replicated to the smallest detail, with incredible fidelity to the face of actor Paul Bettany who plays the avenger, with a flexible fabric cover for more realism, this statue is the perfect pair with the statue "Scarlet Witch - Wandavision - Legacy Replica 1:4" from Iron Studios. 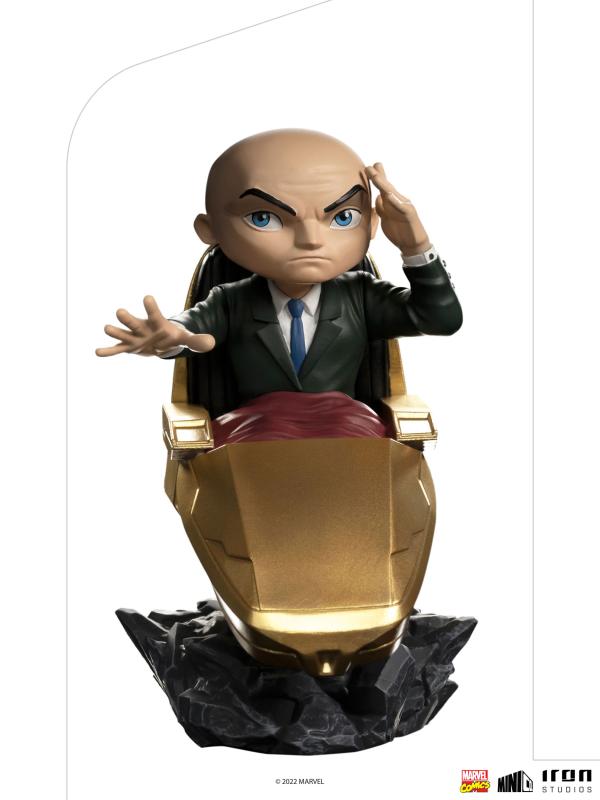 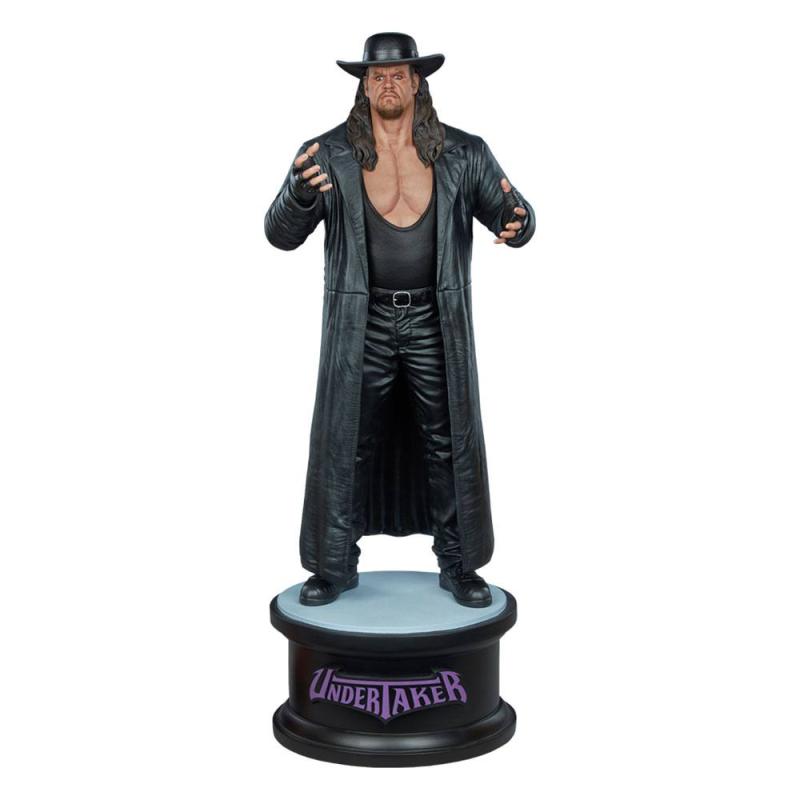 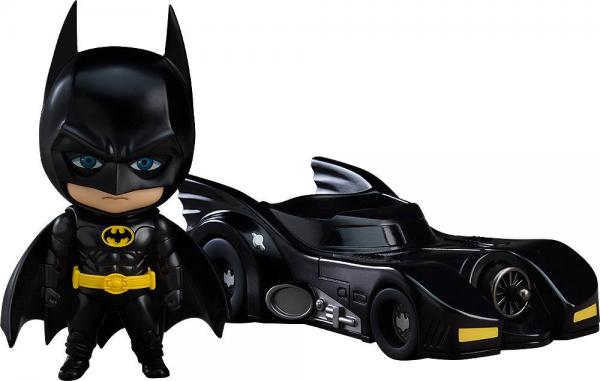 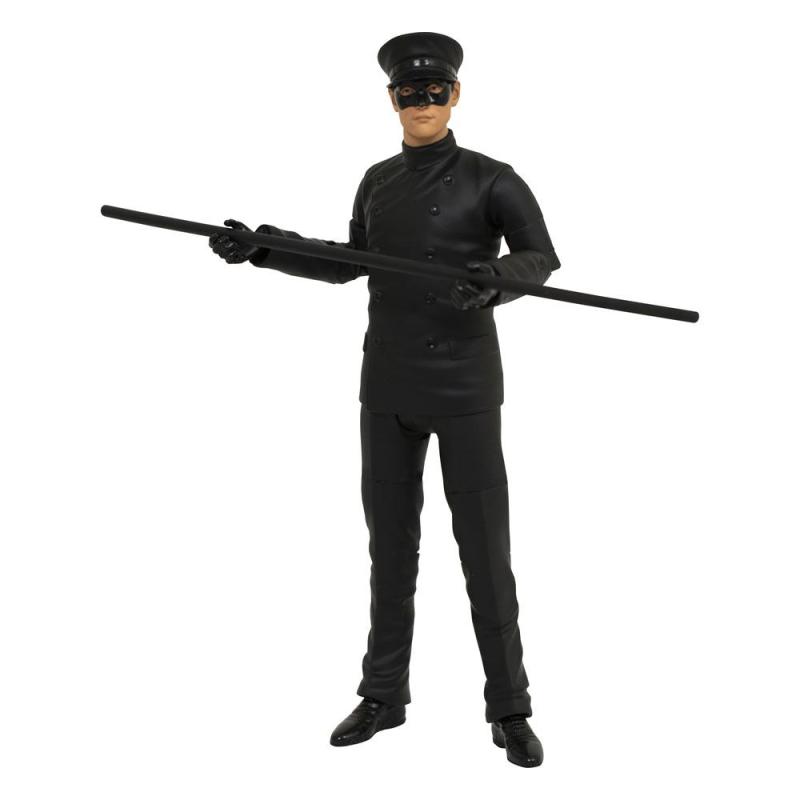 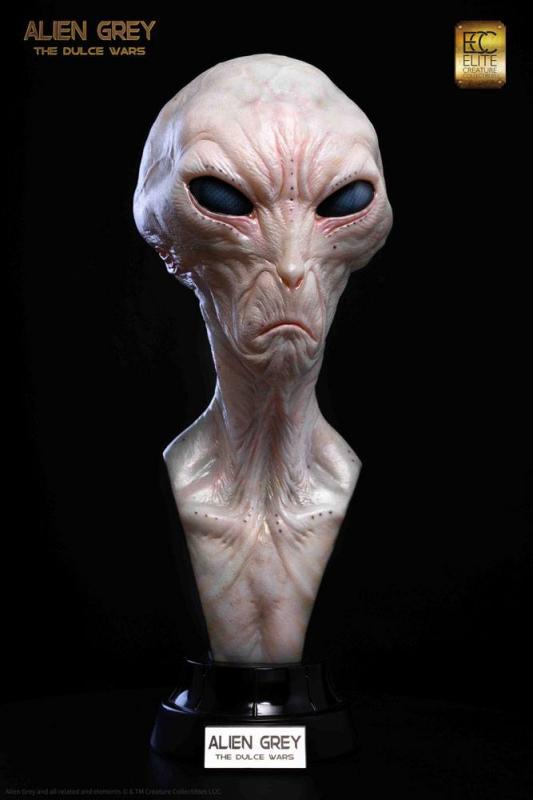